The Marvel of Mangroves

For centuries, mangrove forests were considered as useless swamps. Today many mangroves have been cleared to make way for development.
But mangroves are a vital resource to Kenya’s coastal communities, providing fish, timber firewood and other products. They are a resource that deserves our care, attention and sound conservation management.

The waterways among the mangroves

Mangrove forests once covered some 75% of the coastlines of tropical and sub-tropical countries, but now more than 40% of the world’s mangroves are already gone and in the Americas mangrove, forests are being cleared at a rate faster than the tropical rainforests.

They live in tidal waters so for parts of the day the lower section of many trees are submerged under water, emerging again as the tide goes out. Mangroves have devised special strategies to cope with salty, muddy and tidal conditions. Unique adaptations include leaves that have salt glands capable of removing excess salt and seeds that are able to germinate fast enough before they can be washed away by big tides.  Some seeds even start germinating while on the tree just before they drop and are also sharp pointed and able to stick in mud when they drop to germinate. Several species of mangrove also possess aerial roots, which enable the exchange of gases above the ground or water level.

Children play among the mangroves

Mangrove ecosystems are rich in biodiversity and play a key ecological role in the coastal environment by:

Furthermore, research has shown that mangrove forests play a key role for many fish species, serving as a middle habitat between sea grass nurseries and the adult habitat of the reef. Without mangroves, smaller fish are forced to seek shelter in reefs, where they are exposed to more predators. This means that a direct link exists between the number of fish on coral reefs and the health of nearby mangrove forests. Seven of the nine mangrove species along the Kenyan coastline are found in Mida Creek near to Watamu.

The Creek lies within the Watamu Marine Reserve and the mouth of the Creek opens into the Watamu Marine Park, which host extensive sea grass meadows and coral gardens. The tidal creek is 32km2 in area and fringed with mangrove forest.

The forest plays a crucial role in the creek ecosystem and the interlinked ocean and coral ecosystems. It supports a rich biodiversity of fish, birds, sea turtles, crustaceans, shellfish and other creatures.

Unlike some creeks, Mida has no river entering it. It is fed instead by fresh ground water seeping through from rainfall on the adjacent Arabuko Sokoke Forest and run-off from nearby agricultural lands. This mixed fresh/sea water habitat, which is constantly being flushed through by its tidal influences, provides a unique ecosystem to support a diverse range of plant and animal species. These nutrient-rich waters support the extensive growth of planktons, seaweeds and sea grasses populations. These in turn support the whole interdependent food chain of creek fauna and flora, including the mangroves.

Mangrove roots provide an important nursery area for many species of fish and the open areas of the Creek and its mangrove channels are important for resident populations of feeding and breeding fish species, including Jacks, Snappers, Rabbit Fish, Wrasses, Emperors, Groupers, and Barracuda. This ecosystems are fragile and vulnerable to human development and over-exploitation. They play a crucial role in the healthy functioning of a range of other ecosystems and marine species and when they are damaged these dependent ecosystems such as coral reefs are negatively affected.

Boardwalk among the mangroves

The Mida Creek Conservation Community group (MCCC) was set up in 2002 to combat illegal mangrove cutting and destructive fishing methods. The group has a membership of over 200 people from seven villages around the Creek. Through self-regulation, patrolling and conservation education programmes the group has managed to significantly reduce these destructive activities.  In the past 11 years, the MCCC has planted over one million seeds as part of their mangrove reforestation programme. The group has adopted the ecotourism guiding principle of “responsible travel to natural areas that conserves the environment and improves the well-being of local people.”

Their most successful enterprise has been the construction of a spectacular mangrove boardwalk and restaurant at Dabaso http://www.watamu.biz/  member-list and their aim is to provide jobs for members who in turn will reduce pressure on the Creeks fishery and mangrove resources. 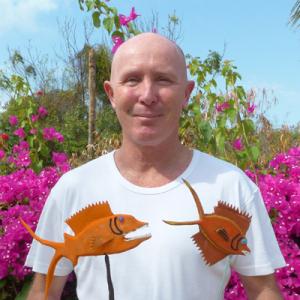 Steve Trott is a marine zoologist and Chairman of Watamu Marine Association. WMA is made up of 30 groups and organisations from the community, tourism and conservation sectors in Watamu.
WMA runs sustainable tourism and ecotourism projects, community waste management and recycling projects and marine conservation and research projects.